Never Walk in Shoes That Talk 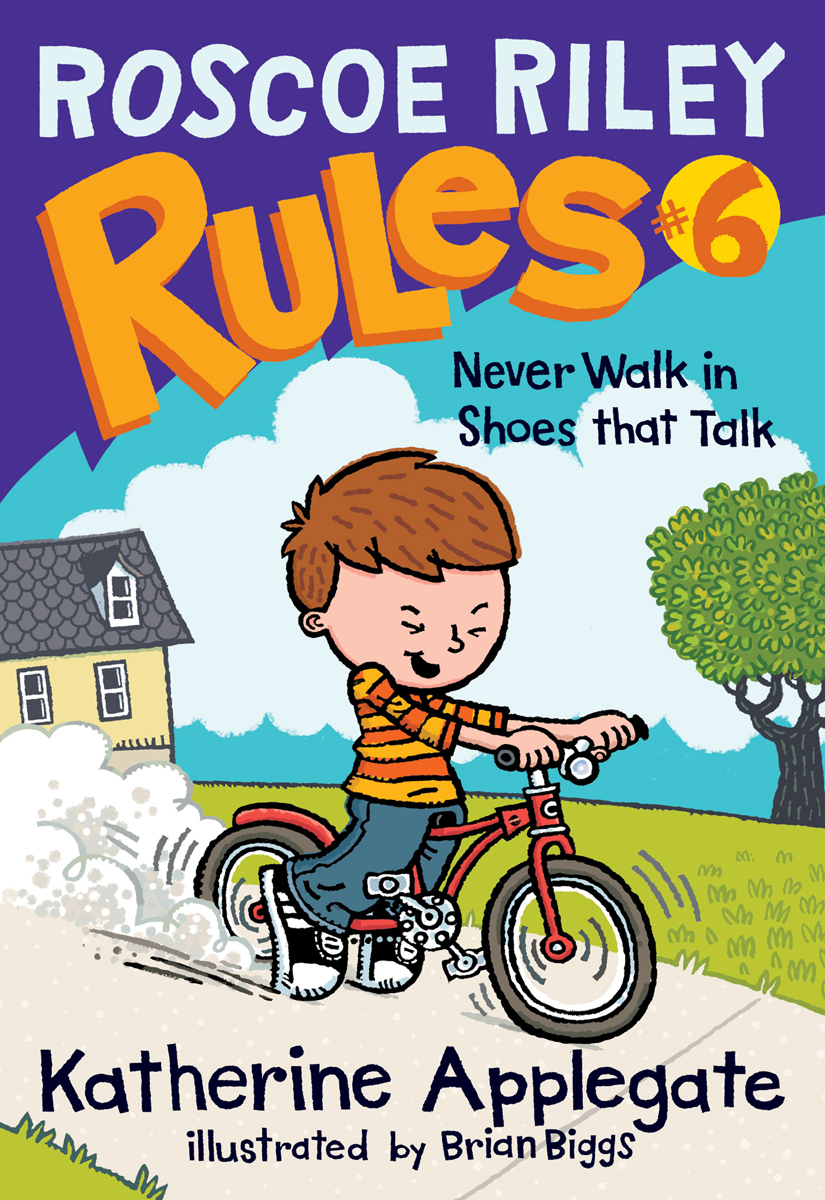 2.
Something You Should Know Before We Get Started

3.
Something Else You Should Know Before We Get Started

6.
Great-Aunt Imogene to the Rescue

Other Books by Katherine Applegate 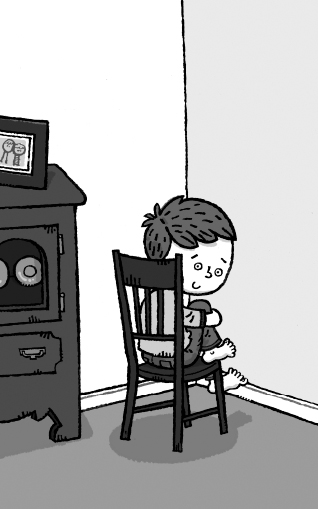 You know, being stuck in time-out isn’t so bad.

If you bring your imagination along for company.

I may
look
like I’m just sitting in my time-out corner.

I just hit sixteen home runs in a row!

I am a baseball superstar.

I have a gazillion fans. I’m a very cool guy.

Inside my brain, anyway.

In real life, I’m a pretty ordinary guy, to tell the truth.

Although last week, I was one of the coolest kids in class for a while.

Actually, being cool is why I’m here in time-out.

Well, that’s not exactly the reason.

I guess maybe the part where I destroyed my friend Gus’s sneakers might have something to do with it.

I was just trying to help Gus be cool too.

You’ve smushed up shoes for a good reason before, haven’t you?

Not even to help out your best buddy?

I guess maybe this
does
sound a little strange.

Maybe I should back up a bit.

To when this all started.

The part before I was cool for two whole days.

2
Something You Should Know Before We Get Started

When a TV ad tells you THESE SHOES WILL NEVER WEAR OUT, do not believe them.

When you have Destructo-feet, anything is possible. 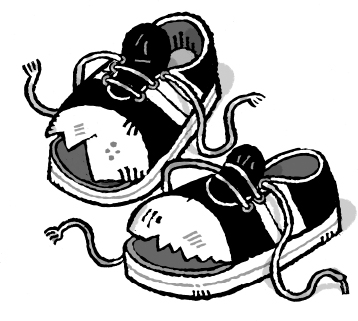 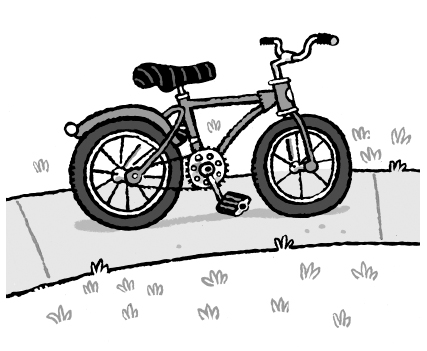 3
Something Else You Should Know Before We Get Started

If you want to stop your bike, use your brakes.

Do not drag your toes on the ground to make it stop.

That is why brakes were invented.

That is all I have to say on the subject.

Everything started one morning when I was putting my backpack in my cubby at school.

I heard Gus shout my name.

“Roscoe! You gotta see this! Hassan and Coco have talking shoes!”

Gus grabbed my arm and pulled. “Come on! This is major!”

Once he told me he was pretty sure his guinea pig could count to ten in Spanish.

So when he told me two kids in our class had talking shoes, I wasn’t all that surprised. 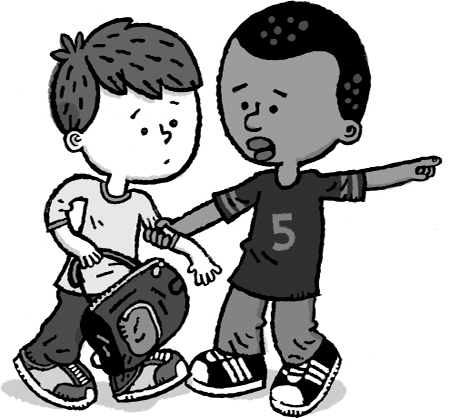 “They’re called Walkie-Talkies,” Gus said. “I saw them on TV. You will not believe the amazingness of these shoes!”

We ran into class.

And there before me was a whole new world of shoe possibilities.

Kids surrounded Hassan and Coco, who were each wearing a kind of sneaker I’d never seen before.

The shoes were made of shiny plastic. Like the boots my sister wears when it rains.

On the other shoe was a big
T
.

There was a black push button near the toe of each shoe.

Coco and Hassan were sitting in chairs on opposite sides of the room.

Coco had her left leg crossed over her knee.

She was whispering something into her shoe.

Which I have to admit looked pretty weird.

Hassan had his right leg crossed over his knee.

And here’s the can-you-believe-it thing: Coco’s voice was coming out of Hassan’s shoe!

“See?” Gus whispered. “Walkie-Talkies! You talk into that little circle on the left shoe. It’s sort of like talking into a cell phone. And if you have a friend with a pair of Walkie-Talkies on, they can hear
you out of a little bitty speaker in their right toe!”

I did not even know what to say.

It was a science miracle.

Better even than Silly Putty.

Coco whispered something to her foot.

Hassan grinned. “My dad got mine in Los Angeles on a business trip. Last time he just brought me a pack of peanuts and a cocktail napkin.”

“Yeah,” Hassan agreed. “The only bad thing is that they are kind of uncomfortable. I have three blisters already.”

We sat there, oohing and aahing.

I knew what we were all thinking.

We were wondering what we could say to our parents that might make
them
say, “Hmm, this kid is so sweet I think I will run to the nearest store and buy him some Walkie-Talkies before they are all sold out.”

I tried hard to think of something sweet to tell my dad.

He is getting balder every day.

Maybe I could tell him I’d noticed some fresh hair sprouts.

“My mom bought the last pair at Shoe Palace,” Coco said. “They said they might get some more next week.”

Ms. Diz, our teacher, came over to see what all the fuss was about.

“Why are you talking to your shoes?”
she asked in a polite way.

“This is the latest in fashion footwear, Ms. Diz!” said Coco.

“I can talk to Coco from anywhere in the room,” Hassan said.

“Hmm. I’m not sure teachers are going to be too thrilled about this idea,” she
said. “I liked the last shoe fad better. The ones that lit up. At least they were quiet!”

“I saw an ad for Walkie-Talkies on TV yesterday and asked my mom if I could get some,” Gus said. “She said no. And then Babette spit up on Mom’s bathrobe.”

Gus shrugged. “It’s just like when my little brother was born. Every time Babette burps, my parents think she’s a genius.”

“It’s hard being a little brother, too,” I said. “We have to wear used-up big-brother clothes.”

I looked down at my own boring shoes.

They didn’t even light up.

They were from the Ugliest Most Uncool Shoe Warehouse, I am pretty sure.

And my big brother, Max, had already worn them.

When you have to wear your big brother’s yucky used clothes, it’s called
hand-me-downs
.

I am not sure what that means.

Except that it seems to involve making sure your kid will never be cool.

“Class, if we could all stop staring at Hassan’s and Coco’s feet for a while, we have spelling work to get started on,” said Ms. Diz.

I would have given anything to have his blisters right about then.

Every Breath You Take by Taylor Lee
If Loving You Is Wrong by Gregg Olsen
The Hunger Games by Suzanne Collins
CLAIMED BY A HIGHLANDER (THE DOUGLAS LEGACY Book 2) by Margaret Mallory
The Princes of Tangleforest by Vann, Dorlana
On the Hunt by Alexandra Ivy, Rebecca Zanetti, Dianne Duvall
Attention All Passengers by William J. McGee
Underground in Berlin by Marie Jalowicz Simon
Return by Peter S. Beagle; Maurizio Manzieri
The Intimate Adventures of a London Call Girl by Belle De Jour