Monday morning I had a dentist appointment for a tooth cleaning.

I wore a new pair of jeans that were a little too long for me so that Gus’s messed-up shoes wouldn’t catch my mom’s attention.

I had the feeling she would not be happy about the dead Ruff and Tuffs.

I chose bubble-gum flavor for my tooth rinse.

The dentist said try to brush those back teeth more.

She gave me a travel toothbrush and some floss for a prize.

Which any kid will tell you is a lame reward.

Mom dropped me off at school after the dentist.

At least, as fast as I could go, wearing floppy shoes that were ripped to shreds.

As I reached for the door to class, I heard Ms. Diz doing something unusual.

“These shoes are going to drive me crazy!” she said. Wow,
I thought.
Coco and Hassan and Gus must really be having fun with their Walkie-Talkies!

I opened the door.

It wasn’t Coco. Or Hassan. Or Gus.

Everyone was wearing a pair of Walkie-Talkies!

Feet were talking to feet all over the place.

“Roscoe, we missed you!” Ms. Diz said when I entered. She looked down at my feet. “Where are your Walkie-Talkies? Everyone else seems to have a pair!”

She rubbed her forehead. She closed her eyes.

The noise was deafening.

Gus ran over to do our secret handshake.

He had on Walkie-Talkies too, but they weren’t mine. They were yellow with orange stripes!

“When my mom saw me wearing your Walkie-Talkies, she said she realized how much I wanted a pair of my own. And then she found out they got a big shipment of them at Shoe-mart,” he said. “Isn’t this amazing? It’s like the whole world has a pair! Now we’re all cool!”

“I put yours in my cubby. Go get them, so we can talk to each other!” Gus said. “Hey, that reminds me. Did you bring my Ruff and Tuffs? Because Mom said she’d
get me these if I save my old sneakers for Albert.”

I pulled up my jeans a little. “These
are
your Ruff and Tuffs,” I said softly.

I think he may have said something. But I couldn’t hear him above all the Walkie-Talkie noise.

Gus opened his mouth, but instead of his voice, I heard Principal Goosegarden.

He was talking out of the loudspeaker on the wall.

We all got very quiet.

“Attention, students!” he said. “Effective immediately, the shoes known as Walkie-Talkies are banned from our school. We
regret this, but we have decided that they are simply causing too much noise during class. If you are currently wearing these sneakers, please remove them. They may be worn today only for gym, recess, and lunch, and when you leave school. Tomorrow, any person wearing these…these extremely noisy shoes will be sent home to change. That is all.”

We sat there in silence.

Ms. Diz did a hoot of happiness. She threw her fist in the air.

I think maybe then she noticed all our unhappy faces.

Because she settled down and said, “I’m sorry about this, children, but it’s for the best. Please put your shoes in your cubbies,
and we’ll get right to work.”

I pulled off Gus’s Ruff and Tuffs.

I checked. “They just smell feety,” I reported.

“I finally got to be cool,” Gus said. “And it only lasted for one morning.”

“Don’t worry, Gus,” I said. “Being cool’s not all it’s cracked up to be. Besides, we can wear our Walkie-Talkies when we hang out together after school.”

“Not after our moms see those Ruff and Tuffs,” Gus said. “We’re going to be in time-out till we’re ninety-four.”

Fortunately, I don’t have to be in time-out till I’m ninety-four.

And neither does Gus.

But I do have to be here for a little while.

And I have to clean out the garage and carry in the groceries forever.

Also, Gus and I have to pay for his
Ruff and Tuffs.

He says I’m still the best buddy in the world.

You know, I kind of wish I’d never even heard of Walkie-Talkies.

The coolness has definitely worn off those sneakers, if you know what I mean.

That’s okay. Having the newest, coolest shoes isn’t as big a deal as I thought it would be.

Although, speaking of new and cool, I
did
see an interesting ad on TV this morning.

It was for a backpack that displays light-up messages.

You can program it to say
HI
!

I’m going to ask my parents if I can get one.

Really, how could they say no? 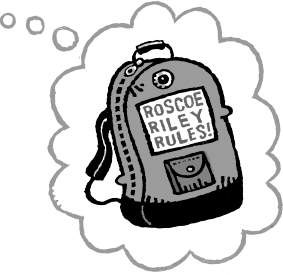 10 THINGS I WONDER ABOUT BEFORE I FALL ASLEEP AT NIGHT
by Me, Roscoe Riley

1. Cauliflower: good for you.
Candy: not so good.

How exactly is that fair?

2. Do fish keep swimming when they sleep?

4. If yo-yos and boomerangs come back, why can’t Frisbees and footballs?

5. Why do dads snore louder than moms?

6. How come recess goes too fast, but spelling tests go on forever?

7. Why was baby drool invented?

8. Why does my big brother always get to be older than me? Couldn’t we take turns?

9. I and eye. See and sea. How come spelling words get to be so tricky?

10. When Mom and Dad say, “No, we will not buy you that new backpack,” do they maybe just this once mean “maybe”?

Katherine Applegate
is not, has never been, and most likely never will be the coolest kid in school. She will never be accused of setting fashion trends either, and that’s just fine with her. Her husband, two kids, dogs, guinea pigs, and cat like her just the way she is. She lives in California.

Visit www.AuthorTracker.com for exclusive information on your favorite HarperCollins author.

Roscoe Riley Rules #3:
Don’t Swap Your Sweater for a Dog

ROSCOE RILEY RULES #6: NEVER WALK IN SHOES THAT TALK
. Text copyright © 2009 by Katherine Applegate. Illustrations copyright © 2009 by Brian Biggs. All rights reserved under International and Pan-American Copyright Conventions. By payment of the required fees, you have been granted the non-exclusive, non-transferable right to access and read the text of this e-book on-screen. No part of this text may be reproduced, transmitted, down-loaded, decompiled, reverse engineered, or stored in or introduced into any information storage and retrieval system, in any form or by any means, whether electronic or mechanical, now known or hereinafter invented, without the express written permission of HarperCollins e-books.