When I got home from school, I ran straight into the house.

“Dad! I saw the most miracle thing today!” I screamed.

Dad was in the family room with Hazel, my little sister, and Goofy, my big dog.

Hazel was using Goofy as a pillow.

Dad was using Goofy as a footrest.

They were watching a cartoon about a giraffe with a sore throat. And eating little crackers shaped like fish.

Dad gave me a hug.

Hazel gave me a fishy cracker.

Goofy ate my fishy before I could.

I told Dad how sprouty his bald spot looked.

Then I asked him if he would buy me some Walkie-Talkies.

“What, exactly, are Walkie-Talkies?” he asked.

His eyebrow went up.

She pointed to a commercial on TV.

A bunch of kids were talking to their feet.

They looked so happy!

A pair of smiling cartoon sneakers appeared on the screen. 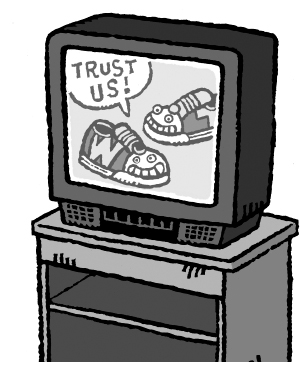 “Walkie-Talkies!” said the left shoe. “Get yours today at a store near you! Over and out!”

A new commercial came on. For diapers that don’t leak.

The babies on the screen looked happy and cool too.

“It’s when a kid whines endlessly, but it does no good,” said Dad.

“Dad, these shoes are awesome,” I said, ignoring Hazel. “And useful. If they make
them in giant foot sizes, then you and Mom can get some, and if you are upstairs and she is in the kitchen and she needs you to help her take out the trash, then she can just do this.”

I grabbed my left foot and leaned down.

“Harold,” I said in my best Mom voice. “Come down here this instant!”

Then I fell over.

Because it is actually not that easy to talk to your foot while you’re hopping on the other foot.

“The world does not need talking shoes,”

Dad said. He shook his head. “What’s next? Singing underwear?”

“I’ll put away groceries till I’m nineteen,” I said.

“Sorry, guy. I am not spending fifty-nine dollars and ninety-five cents so you can chat with your toes. Especially since you wear out shoes faster than any kid on the planet, Mr. Destructo-feet! You’ve gone through three pairs of sneakers since school started!”

“I never get cool shoes,” I whined.

“You’re already cool, Roscoe,” said Dad with a grin. “You don’t need shoes to prove it!”

“Besides, you have tap shoes,” Hazel pointed out.

“That’s different,” I said. “Those are just for dancing. And everybody in class doesn’t want to have a pair!”

I sighed. I flopped on the floor with a groan.

“Over and out,” said Dad. His eyebrow went
way
up.

And when Dad’s eyebrow says “over,” it means
over
.

6
Great-Aunt Imogene to the Rescue

The next morning at school, Coco had on her pink Walkie-Talkies.

Hassan had on his blue lightning Walkie-Talkies.

All the rest of us had on our usual, boring feet.

Maya said, “My mom called six different shoe stores, but no luck. Everybody was
sold out. They all said check back next week.”

“Everybody wants a pair, I guess,” said Coco.

She tied her right shoe while a bunch of us watched.

I have never been jealous of shoe tying before.

“I wore two pairs of socks so my blisters wouldn’t hurt so much,” Coco said. “But it’s worth it.”

“I asked my mom again if I could get some,” Gus said. He sighed. “But she
just said ‘
No
means
no
, honey.’ And then Babette spit up on her jeans.”

“My dad said something about singing underwear,” I said.

“What does that mean?” Gus asked.

I watched Coco tie her other shoe.

I sighed, just like Gus. “It means
no
in Dadspeak,” I said. 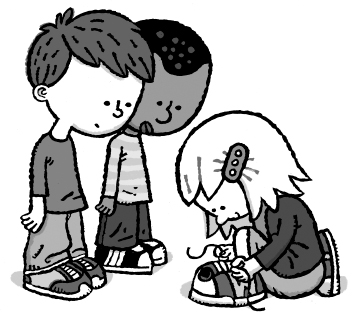 That afternoon after school, Max and I were in the front yard playing where-did-Goofy-bury-the-Frisbee-this-time.

A big truck parked in front of the house. A man in a brown hat jumped out.

He was carrying a shoebox-sized package and a clipboard.

“Is that for me?” I asked, because you never know.

“That depends,” he said. “Are you Master Roscoe Reginald Riley?”

I wrote my name very carefully and took the package.

He looked at the return address. “Too bad,” he said.

I tried to read the handwriting. But it was full of loops and squiggles.

Great-aunt Imogene has about two hundred great-nieces and great-nephews.

Sometimes she gets us mixed up.

She gets birthdays and holidays mixed up too.

Last year she sent me an electric razor for Saint Patrick’s Day.

Which was very nice of her.

Except that I am not doing a whole lot of shaving just yet.

The year before that, she sent me a frilly pink ballet tutu.

I gave it to Hazel.

I tore open the box. Inside was a present wrapped in yellow paper.

I opened the card attached to it.

“
Happy Fourteenth Birthday to Roscoe!
” I read out loud. “
With love and kisses from your Great-aunt Imogene.
”

Which was also very nice of her.

Except that my birthday was five and a half months away.

And I will not exactly be fourteen for another eight years.

“Remember that time she sent Hazel boxing gloves?” I asked. “And Hazel was only two weeks old?”

I crossed my fingers. Maybe there were boxing gloves in the box.

That would be a big improvement over a tutu.

I tore off a little paper. 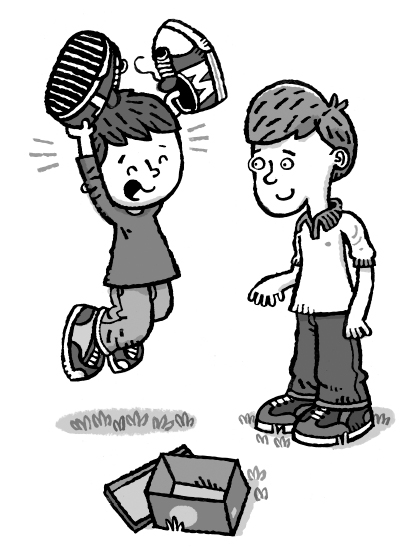 I tore off a little more.

I was afraid to hope.

I closed my eyes and tore off the rest of the paper.

I opened my eyes.

I would have
whoa
ed along with Max.

But I was too busy screaming for joy.

It was a miracle.

There was no other way to explain it.

I had my very own Walkie-Talkies!

When I climbed onto the bus the next morning, Gus took one look at my feet and his eyes grew giant.

We did one of our special secret handshakes.

“How did you get those?” Gus asked. “What did you say to your parents?”

“It wasn’t my parents. It was my Great-aunt Imogene.”

“The one who sent you a teething ring on the Fourth of July?”

“I don’t know what happened. It’s a total miracle,” I said.

“Last night my mom said I have to wait until my sneakers wear out before I can get a new pair,” Gus said. “Then Babette threw up on her sweater.”

“Why do babies throw up so much?” I asked.

He looked at my shoes with a sad but hopeful face.

The way Goofy looks at a hamburger.

Gus kicked at the seat in front of us. “I doubt it,” he said. “You know what these sneakers are called?”

He held up a foot so I could read the words on the side of his shoe.

We both said the ad words together: “
Ruff and Tuffs. The shoes that refuse to die!
”

I don’t know why, but I stuck my feet under the seat in front of me.

It just felt like the right thing to do.

As we walked to class, I kept hoping I’d see somebody with a pair of Walkie-Talkies on so I could try out mine.

No luck. Those shoes were as rare as diamonds.

Lots of kids pointed at my feet as I passed by.

The moment I walked into class, Coco saw my shoes and gasped.

“Roscoe Riley!” she screamed. “Where did you get a pair of Walkie-Talkies?”

“My Great-aunt Imogene,” I said.

“But where did
she
get them?” Coco demanded.

“I don’t know. She lives in New York City. Maybe they have a shoe store there.” 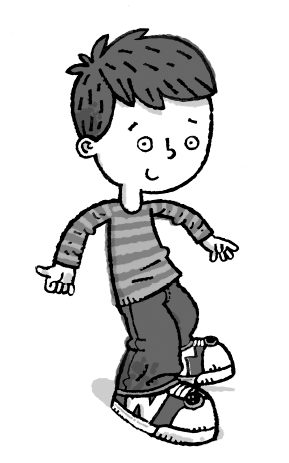 I think maybe it was because she didn’t want to share any of her coolness.

After all, she’d already had to share it with Hassan.

When Hassan walked in, he saw my shoes and grinned. “Hey, Roscoe, let’s try ’em out!” 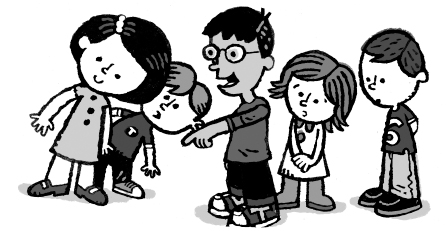 I tapped the button on my left toe. A fuzzy noise filled the air.

It sounded like our car radio when Dad can’t find a station to listen to.

Hassan tapped his toe button too.

Everybody gathered around to see the shoe show.

Or at least a guy with movie-star shoes.

“It’s easier if you sit down,” Hassan said.

And there was my voice, coming out of Hassan’s foot!

“Do you hear me?” Hassan asked his toe.

Sure enough, his voice came out of my right shoe!

Of course, I could hear him anyway. On account of he was standing right next to me.

But still. It was about as amazing as shoes can get.

I let everyone have a turn talking to my toe.

It was the first time most of my classmates had gotten a chance to try Walkie-Talkies.

Coco hadn’t let anyone try out her shoes.

But I kind of liked all the attention.

Kind of a lot, actually.

Ms. Diz rang her gong. That’s the big bellish thing on her desk.

She uses it to say
Time to get to work, kids
. So her voice doesn’t get worn out.

Usually the gong works. But today nobody paid any attention.

There were too many kids waiting to talk to my toes.

Ms. Diz said, “I can see we’re not going to get anywhere until you get this out of
your systems. All right, everybody, line up to chat with Roscoe and Hassan’s feet.”

I let Gus go first. “Hello,” he said. “I wish I had a pair of these so we could talk to each other in class, Roscoe!”

I started to tell Gus he could borrow my shoes anytime.

But the other kids had already pushed him aside so they could have a turn.

He probably wouldn’t have heard me, anyway.

There was a whole lot of foot talking going on.