All day long, Coco and Hassan and I were the stars of the class.

Everybody wanted to sit with us.

Everybody wanted to play with us at recess.

Everybody wanted to push the buttons on our magical sneakers.

Near the end of school, Dewan tried to
Walkie-Talkie my foot to say hi to Hassan during math review.

Ms. Diz made a grouchy face.

“Roscoe?” she said. “I need you to turn off your feet, please. Hassan, you too. Those shoes are a bit disruptive.”

I didn’t mind so much. My toes were a little tired of all the attention.

But by the next morning, they were ready for action again.

It was the same as yesterday. Coco and Hassan and I were like movie stars.

Well, maybe we weren’t
quite
that cool.

But we weren’t ordinary kids anymore.

Especially since nobody else could buy Walkie-Talkies anywhere.

Our shoes sort of united us.

First thing in the morning, we said hi to each other on our shoes.

At lunch, we compared desserts on our shoes.

During music, we sang “Make New Friends, but Keep the Old” on our shoes.

And at recess, we played hide-and-seek, Walkie-Talkie style.

I spent most of recess hiding under the slide.

Hassan and Coco wandered around the playground trying to find me.

“Warmer,” I said into my shoe.

Hassan turned one way. Coco went the other.

“You’re so cold you are growing nose icicles,” I said.

I looked up from my hiding place to see Gus.

“You’re both at the North Pole, you’re so cold,” I answered.

Gus sighed. “I’m gonna go swing, I guess. Are you still coming over to my house after school?”

“Roscoe?” my shoe asked. “Am I getting warmer?”

I looked up. There was Hassan. Coco was right behind him.

“I’m going to go hang out with Gus,” I
told Hassan, but just then the bell rang.

“Recess is over, Roscoe!” Hassan said into his sneaker.

I watched Gus trudge away slowly, kicking dirt with his Shoes that Refuse to Die. 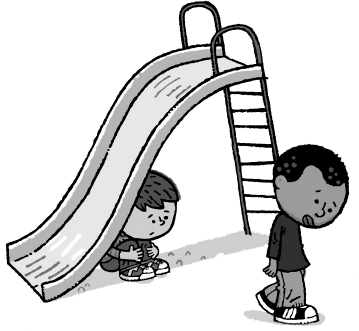 Mom drove me to Gus’s house that afternoon after school.

Gus was sitting on the front porch.

His mom was helping his little brother, Albert, ride a blue plastic trike.

His dad had Babette in a pouch thingie that hung from his chest.

My mom ran over to make ooh-how-cute noises about the baby.

I ran over to Gus to make ooh-how-gross noises about the baby.

When Mom finally drove off, I am pretty sure she was still oohing in the car.

“So, Roscoe,” said Gus’s dad, “these are the famous Walkie-Talkies I’ve heard so much about.”

I held up a foot so he could see one.

As he leaned over, Babette drooled on my sock.

I tried not to look shocked.

But I was for sure going to have to throw that sock away when I got home.

“You push this button here,” I said. “And if someone else has Walkie-Talkies, you can talk to them.”

“Oops,” said Gus’s dad. He winked at Gus. “They are awesome, Gus. When your sneakers wear out, we’ll talk about it.”

“These are Ruff and Tuffs, Dad. They never wear out,” said Gus.

Gus’s dad was about to answer, but Babette started crying.

Just then, Albert tipped over on his trike and skinned his elbow.

He cried even louder than Babette.

“Boys, you two will have to come inside while we take care of the little ones,” Gus’s mom said.

We followed the two screaming kids and Gus’s parents inside.

“Gus!” his dad said. “Could you bring me some baby wipes? They’re in the diaper bag in Babette’s room.”

“And grab that box of Band-Aids in the bathroom, Gus,” added his mom.

“Sometimes I hate being a big brother,” Gus muttered.

Gus headed up the stairs. A few minutes later, he came back with a box of baby wipes and some Band-Aids.

“Let’s go play in my room,” he said. “There’s too many little kids down here.

Gus’s room was even messier than mine.

I sat down on a pile of dirty clothes and felt right at home. 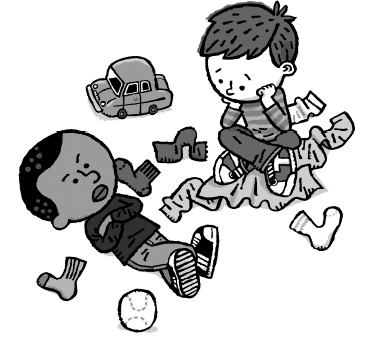 “I remember when Hazel was a baby,” I said. “My parents paid all the attention to her. It was like Max and me didn’t even exist.”

“You’re not invisible to me!” I said.

I tossed a dirty sock at Gus and scored a direct hit.

He didn’t even fire the sock back at me.

I had to cheer him up somehow.

“Gus,” I said. “I’ve got a great idea. I want you to wear my Walkie-Talkies for a while. For a whole day, even.” I thought for a moment. “No! For a whole entire week!”

Gus tried to put on my right Walkie-Talkie.

He made a face and shook his head.

Gus tried again. “I feel like Cinderella with the glass slipper.”

“Actually, the slipper fit Cinderella. You would be an ugly stepsister,” I said.

Finally, Gus managed to squeeze his feet into both shoes.

He stood up. He was a little wobbly, on account of his squished condition.

“Ow,” he said. “They’re amazing. Ow. But I don’t think I could wear them for a whole week. My feet would probably fall off. Thanks, though.”

“You’ll get some Walkie-Talkies soon, Gus,” I said. “Your sneakers have to fall apart eventually, right?”

“How can shoes refuse to die?” I asked. “Dad says all my sneakers wear out in a week.”

I picked up one of the Ruff and Tuffs. “I know what their ads say,” I said. “But these sure look like regular old sneakers.

I’ll bet you I could wear them out in no time!”

“I wish you could,” Gus said. “Then I’d finally get my own Walkie-Talkies!”

And that’s when it hit me.

I, Mr. Destructo-feet, was the answer to Gus’s Walkie-Talkie prayers.

“Gus,” I said. “Let me borrow your sneakers for a day. I guarantee you’ll need a new pair of shoes in no time, if my feet have anything to say about it!”

“Roscoe,” my dad said when I got home, “where are your Walkie-Talkies? And whose gigantic shoes are those?”

“They’re Gus’s,” I explained. “He really, really wants a pair of Walkie-Talkies. We’re switching for a day.”

“How can Gus’s feet possibly fit in your shoes?” my mom asked.

Mom and Dad gave each other a kids-are-crazy look.

All that evening and Saturday morning, I wore Gus’s shoes.

I wore them to the playground.

I wore them climbing up to my tree house in the backyard.

I wore them while I played basketball with Max.

And you know what?

Those Ruff and Tuffs got dirty and dusty and dinged up.

But they definitely were not interested in dying anytime soon.

Clearly, I had to get serious.

I ran my fastest.

I jumped my highest.

I kicked the hardest rocks I could find.

But those shoes were still almost as good as new.

By Saturday afternoon, it looked like I was going to have to tell Gus that I’d failed.

“Here,” I said when he came over to play. “Take your Ruff and Tuffs back. Turns out they can’t be killed. I tried everything.”

Gus examined one of his sneakers.

“Amazing,” he muttered. “That ad is actually true!”

“I’ve never seen sneakers like this,” I said. “I can’t understand it. I did all the things I usually do with my shoes.”

Suddenly another one of my great ideas popped into my brain. “Hey,” I said with a grin, “maybe we need to try some
un
usual things.”

I led Gus to the garage and opened my Junior Handyman toolbox. 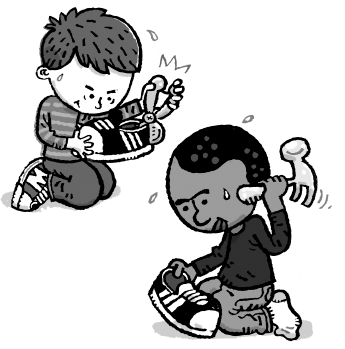 I chose a nice yellow pair of pliers.

Gus hammered his right Ruff and Tuff as hard as he could.

I squeezed and poked his left Ruff and Tuff as hard as I could.

“Boys?” my mom called from the driveway. “What are you up to in there?”

“We’re just making something, Mom,” I yelled back.

After five more minutes of hammering and pliering, we checked our work.

Gus shook his head. “These are like Godzilla shoes. They’re indestructible.”

“Nothing’s indestructible, Gus,” I said. “Take it from Mr. Destructo-feet.”

“What else can we do to them?” Gus asked.

I threw one of the Ruff and Tuffs at the garage wall.

It bounced right back to me.

Before Gus went home, I asked him to let me keep the Ruff and Tuffs for one more day.

I just wasn’t quite ready to give up yet.

Especially when you get beaten by a sneaker.

I sat near the garage, holding Gus’s
sneakers in my hands. Wondering where I’d gone wrong.

Hazel was riding her pink bike up and down the driveway.

She was singing “How Much Is that Froggie in the Window?”

I watched her come and go.

It’s a long driveway, with a little bit of a hill.

Hazel had to brake pretty hard when she got to the bottom.

Her tires left a black mark on the cement.

I ran to get my bike out of the garage.

“I have only just begun to fight,” I said.

I laced up Gus’s Ruff and Tuffs and climbed onto my bike.

I sped down the driveway at top speed. 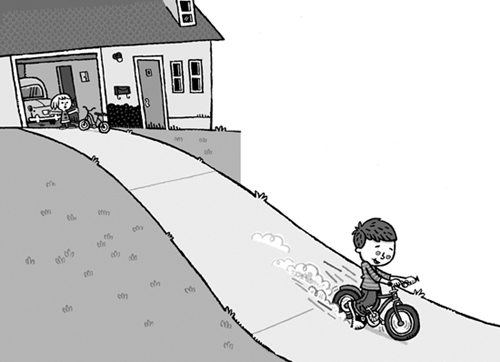 I slowed down, all right.

But I didn’t use my pedals to brake.

I dragged those Ruff and Tuffs along the cement and stopped just in the nick of time.

But I didn’t care.

When I got back to the top of the hill, I checked my handiwork.

The toes were scuffed!

I went down the hill again, sneaker-braking for the last half.

“Brothers are so weird,” Hazel muttered.

After ten more rides, the Ruff and Tuffs were looking quite scraggly.

Suddenly I had a gulp moment.

I thought about Gus’s mom and dad seeing the destructo-ed Ruff and Tuffs.

What if they weren’t so happy about Gus’s shoes dying?

Oh, well,
I thought. I was just trying to make Gus feel better.

And like Mom always says, it’s the thought that counts.

Besides, it was too late to turn back now.

I went down that driveway thirty-two more times.

The Shoes that Refuse to Die were going to need a funeral.

The Ghost Writer by John Harwood
Good Curses Evil by Stephanie S. Sanders
Secret Gifts (Steamy Version) by Elena Aitken
The Dark Descends by Diana Ramsay
The Boy Under the Table by Nicole Trope
Once Upon a Scandal by Barbara Dawson Smith
The Book of Card Games: The Complete Rules to the Classics, Family Favorite and Forgotten Games by Nikki Katz
The Scent of Rain and Lightning by Nancy Pickard
Pleasure's Edge by Eve Berlin
September Sky (American Journey Book 1) by John A. Heldt