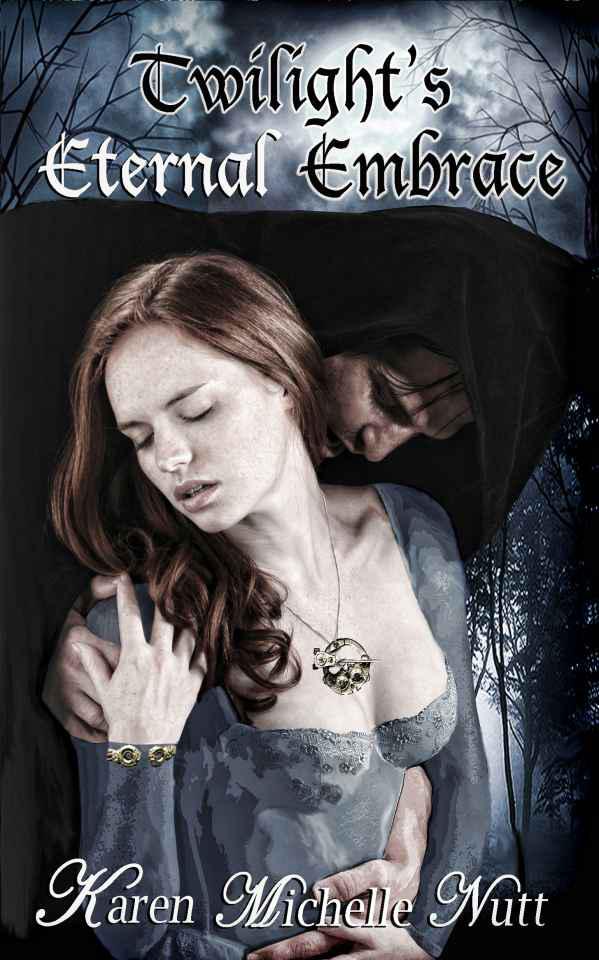 All rights reserved under U.S. and International copyright law.
This ebook is licensed
only for the private use of the purchaser
.
M
ay not be
copied, scanned, digitally reproduced, or printed for re-sale, may not be uploaded on shareware or free sites, or used in any other manner without the express written permission of the author and/or publisher.
Thank you for respecting the hard work of the author.

Twilight's Eternal Embrace
is a work of fiction.
Though actual locations may be mentioned, they are used in a fictitious manner and the events and occurrences were invented in the mind and imagination of the author except for the inclusion of actual historical facts. Similarities of characters or names used within to any person – past, present, or future – are coincidental except where actual historical characters are purposely interwoven.

Dedicated to those who love vampire lore and legends.

There was a time when the nightwalkers lived among the humans, before they were known as vampyres or vampires to the modern world. The nightwalkers had their own clans and names they called themselves: Dearg-due, Oiche Sith, Draugr, Kyuuketsuki—to name a few of the older clan families. The nightwalkers
'
way of life was similar to the daywalkers. The only difference being the nightwalkers required blood to sustain life, a source easily supplied within their own clan. Male and female shared their blood with each other. There was no need to seek outsiders.

As time marched on, their way of life became compromised. No more children were born to the females of the nightwalker clans and their numbers dwindled. For a preternatural being, that was virtually immortal in comparison to other life forms of the world, the idea of fading into history as merely a legend proved terrifying. Something had to be done…

Though there are many stories of courage, this is Adryann
a and Bram's story, a daywalker
and a blood drinker, who defied the odds and forged a
new destiny
.

The day
was
hers. The night
was
his
.
But
T
wilight
was
theirs.

Oiche Sith ruled Dungannon and the Lath
e
Sith, the daywalkers of Coomkeen were their dutiful subjects.
"
We are the weaker clan.
"
Adryanna seethed with anger as she scrambled over the rocks and bramble to reach Dungannon where the blood drinkers resided. Her sister, Fianait had been chosen.

As Fianait was dark in color with raven black hair, a sweet lass who never caused trouble
,
Adryanna was the opposite in every way. Her hair was the color of the sun, yellow with tinges of orange and her temperament would try anyone
'
s patience.

Adryanna loathed the arrangement her people had with the Oiche Sith. The Oiche Sith, as their name claimed, ruled the night. They were stronger, swifter and ruthless if provoked. They kept the lands safe from invasions. They
asked
for only one favor in return. When the Oiche Sith turned
one
and twenty, they needed blood to fully transform to the warrior stage of their existence. One of the Lath
e
Sith would be chosen—no,
sacrificed
—so the Oiche Sith could live.

"
Damn them for needing our blood,
"
Adryanna cursed under her breath.

Fianait was petite and would not survive. The brute would drain her dry before he gained control. Of this Adryanna was certain.

The moon was full tonight, casting the light she needed to travel. It was forbidden for her to be here, but she would not let her sister meet her fate alone.

The entire courtyard of the castle was decorated for the event with wild flowers and ribbons. The firelight from the sconces and candles danced off the castle
'
s stones like winking stars.

Adryanna stayed hidden within the trees. The hill stood high enough for her to see the event without hindrance. The clan stood waiting on either side of a red runner, fashioned from woven fabric and ribbon. Music played and the crowd turned to witness the arrival of Fianait. Two large mares pulled a cart adorned with flowers and garland. Fianait stood proud in a gown of light blue. Her hair was pulled back to expose the tender flesh at her neck.

Adryanna heard whispers from the elders of her clan when they thought she was not listening. The blooding ritual caused the Oiche Sith
to
lose control. They would ravish their young bride
'
s flesh, leaving it shredded with a gaping wound that brought death. Yet the elders of her clan still allowed the ritual to take place. They feared the Oiche Sith
'
s wrath if they refused. She saw the unease in their eyes
when
they spoke of such tales.

As the cart moved closer, Adryanna had a better view of her sister. Fianait held her chin high. She did not fear the duty. It was a great honor and
her
family would be handsomely rewarded for their sacrifice. The elders of the Oiche Sith already presented them with a palfrey and supplies they could not purchase on their own, like tea and spices. They brought bolts of fabric to her mother, enough to make winter garments for the whole clan. If Fianait survived the night, the Oiche Sith would honor her, but very few ever survived. None survived after a month
'
s time of the brutes feeding off them.

Adryanna gripped the dagger in her hand as visions of slitting one of the Oiche Sith
'
s throat entered her mind. She
'
d like to see them bleed out for a change.

Adryanna shifted her gaze to the Oiche Sith, who would take Fianait to his bed. He stood on the bottom step that led into the castle. His hair was long and the color of autumn leaves. He looked pale and unsure on his feet. He had yet to fill out, looking more boy than man when compared to the warriors of his clan. He was still larger and taller by far than her people. She knew come tomorrow he would be inches taller with a broad chest and thick legs. This was the way of the Oiche Sith and how they developed into manhood.

When the cart stopped at the foot of the steps, the Oiche Sith approached Fianait. He offered his hand to her and helped her down. He held her at arms
'
length as his gaze swept over her in appreciation. He pulled her closer, pressing his lips to her right cheek then the left, the sign of his approval and acceptance. The crowd of onlookers cheered in response.

Really, would the Oiche Sith turn an offering away even if the lass was a hideous beast? She thought not. They needed their blood, their females since they could not breed. The Lathe Sith needed the Oiche Sith
'
s alliance to keep the borders secure against the other blood drinking clans that were stronger and more powerful than her clan.

A tear slid down Adryanna
'
s face and she angrily brushed the offensive dampness away. She promised Fianait she would not cry for her, but how could she not mourn her sister…her friend? She would never see her sweet smile again.
"
Damn the bloodsuckers.
"

Adryanna had witnessed enough and whirled away with plans to head home to grieve. She came up short when she stood face to face with two youths of the Oiche Sith
clan
. They were not broad shouldered so they had not gone through the change, but they were close to her age she was sure—perhaps nine and ten
, not much older
. They bared their fangs with a gleam in their eyes.

Splendid, her parents would lose two daughters this night. One in honor and one in disgrace.
Well, she would not die easily. She gripped her dagger, revealing the threat. The young men blanched as they caught sight of her weapon, but then they laughed. They thought her weak, a female and a Lathe Sith at that, but she knew how to fight and she
'
d make them bleed before they killed her.

"
Do you think your puny dagger will harm us?
"
the taller of the two barked.

"
Venture closer and we will find out,
"
she taunted with more courage than she felt.

They only took a step, before another joined them.

"
Halt,
"
he warned the two. The one word was a command no one could refute without consequences.

Adryanna
'
s gaze slid over the newcomer with interest. His hair gleamed dark as night. He was long and slender
,
indicating he had not made the transition yet either, but she sensed his time was near. He was sure of himself and he wielded a broadsword. He was already in training to take his place as one of the warriors.

His eyes shifted to her and she swallowed the lump in her throat. Never had she seen such blue eyes. Even in the moonlight, they stood out. They were like the deepest blue of a morning sky, welcoming in their warmth. She shook her head in confusion.
What nonsense.
To her, he was nothing but a bloodsucker.

"
Have you come to join us?
"
She lifted her chin.
"
I was just going to show your friends the sting of my dagger. Mayhap you would like me to carve a tattoo on your forearm
?"

His dark brows winged up and his full lips curved into a smile.
"
Perhaps later.
"
He narrowed his eyes on the other two.
"
Begone, Fergal and
Niven
. Your fun is over this night.
"

The two youths grumbled, but they did not question the
Blue-eyed Devil
, who
'
d ordered them to leave.

Once they were alone, Adryanna wasn
'
t sure if one threat was better than the other, but at least she
'
d have more of a chance with one Oiche Sith than with two.

"
I mean you no harm,
"
the
Blue-eyed Devil
said, his voice soothing in its claim, but her heart hammered
,
warning her he was a danger to her. Only she wasn
'
t sure why. His stance spoke of no threat.

He had a wildly handsome
face and the moonlight accented captivating shadows beneath his eyes. Her gaze fastened on his mouth and for a heartbeat of time, she imagined how those
masculine lips
would feel pressed against hers
.
With a sensuous mouth like that, h
is kisses would surely make a woman forget herself.

She met his steady gaze. The blood rushed to her head and she felt her cheeks flame hot. What was she doing? Then she knew. It was the
Blue-eyed Devil
'
s
fault. "
Stop it.
"
She raised her dagger and jabbed it at him.
"
Do not come closer. I will not have you glamour me.
"

He lifted his hands in mock surrender.
"
I have done no such thing.
"
His brows furrowed with concern.
"
What makes you believe such magic was done to you?
"