Read Finding the Thing Within Online

Finding the Thing Within 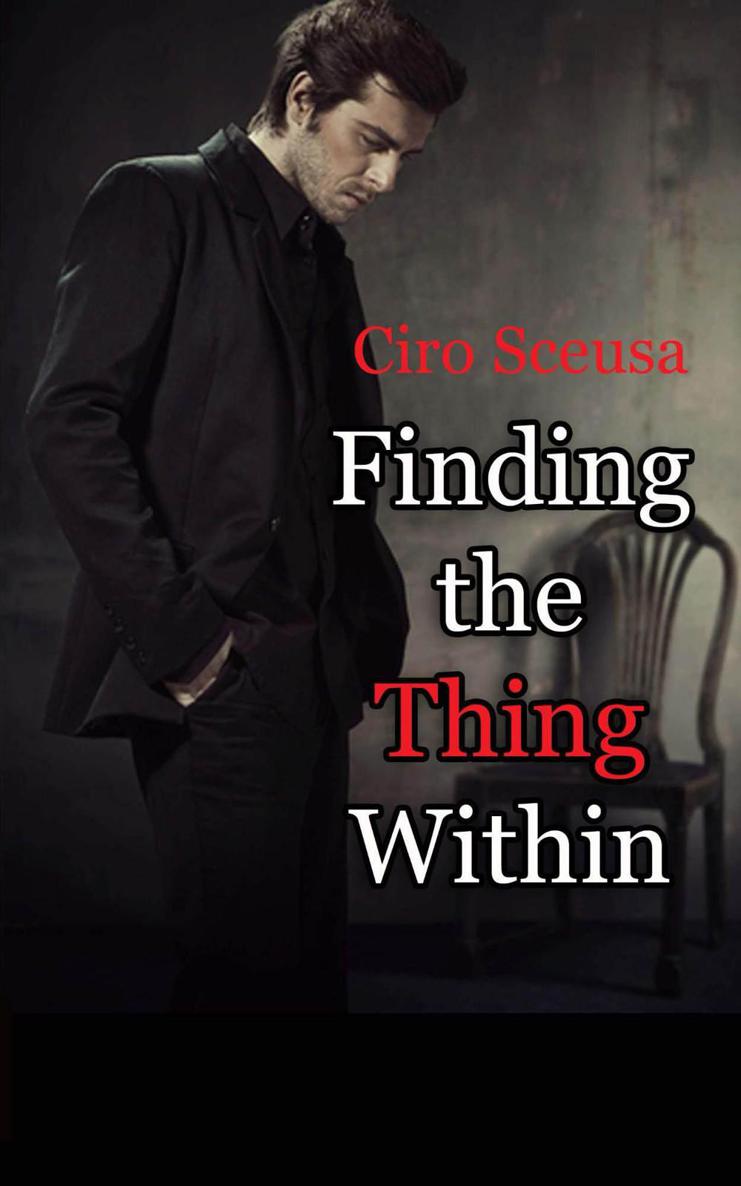 Finding the Thing Within

3
rd
Edition
ISBN-13: 978-0615825533 ISBN-10: 0615825532
This book is a work of fiction. Names, characters, events, and locations are fictitious or are used fictitiously. Any resemblance to actual persons or events, living or dead, are entirely coincidental. This file is licensed for private, individual entertainment only. The book contained herein constitutes a copyright work and may not be reproduced, stored in or introduced into an information retrieval system or transmitted in any form or by any means (electrical, mechanical, photographic, audio recording, or otherwise) for any reason (excepting the uses permitted to the licensee by copyright law under terms of fair use) without the specific written permission of the author.
For more information, please contact:
[email protected]
Dedicated to you,
“I lived for my art, I lived for love, I never did harm to a living soul. With a secret hand I relieved as many misfortunes as I knew of. Always with true faith my prayer rose to the holy shrines. Always with true faith I gave flowers to the altar. In the hour of grief why, why, o Lord, why do you reward me thus? I gave jewels for the Madonna’s mantle, and I gave my song to the stars, to heaven, which smiled with more beauty. In the hour of grief why, why, o Lord, ah, why do you reward me thus?”
~ From Giacomo Puccini’s Tosca.

He lay back on the bed and wept. He, who had never, for any reason, cried for anyone his whole life, was crying with abandon. Not once in his forty-seven years had he shed a single tear. He had not cried at his father’s death three years previously, not even when they were laying him in the tomb, surrounded by wet-eyed family and friends. They called Rosario “heartless” or “cold-hearted”, which amounts to the same thing. Now his tears flowed uncontrollably and he tossed and turned, until finally he fell asleep.

Everything had begun five months earlier when, flicking through the bright pages of the gay.it website, he entered the site’s forums. He trolled it fairly frequently, jumping from one discussion topic to another, but his time his attention was hooked by a particular post:

“I just want to meet someone with a little
...”

He clicked and read on:
“Hi, I’m a bit confused... I just can’t find anyone here in Palermo who accepts their real sexual nature without letting it get perverted! Anyway...I’m someone with a brain... please PM me if you agree... we could then chat perhaps if all goes well, we'll see. Bye. Lorenzo”

Rosario lost no time in replying:
“I think I know what you mean. Let’s get in touch.”

Then he gave Lorenzo his personal email under the username “cicciobollo” and two days passed before he got a reply:

“Hello cicciobollo... or whatever your name really is... I saw that you answered straight away… So, where are you from? I want to talk to you and see if we have other things in common... if you want to, id like to stay in contact. Lorenzo”

“Shit shit shit, he thought. Who is he? And how old? He must be one of those total monsters that just want to talk and nothing else. Hmm, we could stay in contact and just see how it goes though...”

Rosario didn’t usually enter into long term relationships and since age fifteen his sex life had been one long adventure. It was great; or rather it had been great, he looked at least ten years younger than his real age, as he knew well and boasted about. Actually it was his best strength. He didn't like his physique in general; he was no athlete and he couldn't stand his fairly lean legs and slight belly. He would have had them cut off.

When he met someone manly between 18 and 28 with a nice face and body, and they asked him “How old are you?” he was always ready with his standard counter “How old do I look?”. He would bloat with pride when almost everyone answered that he looked between 34 and 37. Although he didn't correct him when one time one of these young guys said he looked “about thirty”, he did think that he must have had something wrong with his eyes.

He immediately answered the email:
“Hi Lorenzo, I’m Rosario and I’m from Palermo as well!! I’m 39 and I’m into music and electronics and lots of other serious things too. I suppose I’m good-looking, fivefoot-ten and weigh about sixty k...what can I say? I look like a man and I like manly-looking men! And you? What are you like?”

He clicked send and waited.

As usual, before setting off to work the next morning, he checked his inbox. Nothing. He had continued living with his mother when his father died. She was a suffering, sickly seventy-eight-year-old woman. She had never in fact had any real diseases, there were no “positive” results from thirty years of blood and urine tests. Yet she complained: she would complain of headaches, that she had heartburn trying to digest various parts of the previous night’s dinner, and even that she was blocked and “couldn’t go”.

The afternoon flew by and soon it was seven o'clock. Rosario arrived at the barracks, as punctual as a Swiss watch, and looked around for Carmelo. Getting out of the car he looked around again, but still couldn't see him. There were other boys hanging around the barracks and a sizable group of army personnel were crossing the road towards the trattoria.

“Here I am, sorry I’m a bit late, I had things to do inside!”
“Doesn’t matter. Just got here. Shall we go?”
He was wearing the same t-shirt as before, to which he had added a denim jacket. He hadn’t noticed at lunch about his height. He wasn’t really that tall, maybe six foot, but he seemed taller. Handsome, Christ he was handsome, he had a happy air about him and oozed joy from every pore.
“What are you going to do in these next few days?”
“I’m going to spend some time with my girlfriend?”
“Oh, you’re engaged?”
“Well, 'engaged', no.”
“Have you known her for long?”
“Five years.”
“Five years! So you must’ve got together really young!”
“Yeah, I was fourteen when we met! We pretty much grew up together.”
“So you must really love her?”
“Shit yeah, I love her, we love each other.”
“Didn’t you meet other girls while you were here in Trapani?” A great tactic to find out about the sexual habits of practical strangers.
“I told you, in this shit-hole the girls look at you then, nothing. If you actually want action you'd have to pay a visit to the whores!”
“And you never made a visit?” Rosario was pushing the point and beginning to enjoy the direction of the conversation.
“You mean, to whores? No, I don’t go to them. I’d rather wait till I get home to my Mirella.”
“I did my military service in Trapani too, you know. At Birgi to be precise, at the airport, when it was still a doss, now it’s become a military airport controlled by America and I don’t think it must be like it was.”
“Really!” answered Carmelo.
“Yeah and we were the same when we left barracks and there was nothing to do, and the girls didn’t give us much attention either. People went to whores, or even gay ones.”
“Gross. I can’t stand how they strut about shaking their hips on the street and shouting at you!”
“Well, I don’t think they’re all like that. Some are far more manly, don’t you think?”
“No they’re all trannies to me!”
Rosario frowned a little, yet all was not lost.
“And then, how could a man get together and do it with another man? I think it’s fucking sick, but I know plenty of guys there who did it, and paid too!”
They were nearing Palermo, and Rosario knew that he would have to move things forward a little if all were not to be lost. It might already, but there was still a slim chance.
“Sorry, I forgot to introduce myself, I’m Mr. Mollica, Rosario Mollica, call me Rosario.”
“But you’re older than me, it’s hard to call you by your first name.”
“Ah, but I can’t stand when people call me Mr. Mollica,” came back Rosario, as he put on a charming smile.
“Well, ok Rosario. You said Rosario, right?”
“Yeah, listen Carmelo, what are you doing later?”
“Shit, I’m going to spend some time with my lady; I haven’t seen her for about ten days!”
“Totally,” Rosario was nervous, his heart racing, not knowing what to do he thought about extending his hand a little and let it finish how it would finish. What a scene if he got mad and wanted to get out of the car.
Carmelo’s phone broke the silence.
“Hello, Mirella babe! Not long and I’ll be back in Palermo, just give me the time to have a shower and then I’ll be over…What? No baby, really?...Oh...No, yeah, that’s fine love, I’ll see you tomorrow. You too, bye.”
“What is it?”
“Her Aunt, she fell and broke her leg so tonight they’ve all gone to see her, and won’t be back till late.”
“So you’re not doing anything then?”
“Looks like it!”
“Do you fancy going for a beer? I’ve just broken up with my girlfriend and I’m single,” he lied shamelessly.
“Erm, well I wouldn’t want to...impose.”
“Where shall I pick you up?”
“I live kind of close to the Politeama theatre; we can meet in front at say…nine-thirty?”
“Ok, you mean half-past nine, fine for me.”