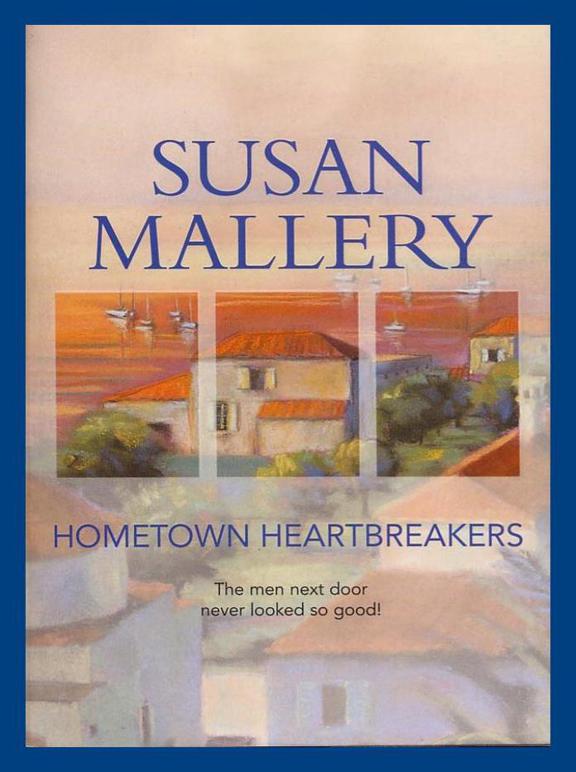 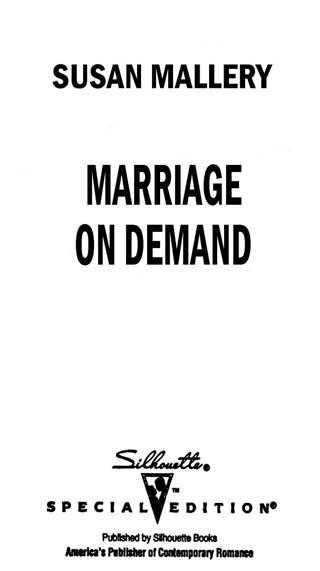 Rebecca Chambers stood just inside the garage door, soaking wet. The sound of the storm outside blocked the steady drip-drip from her dress and hair, but she could feel the individual drops collecting on her arms and legs, then falling to the ground. No doubt her mascara had formed perfect half circles under her eyes. She didn't normally wear much makeup, but today she'd taken special pains with her appearance. Her white T-top was silk, and washable, thank goodness. But her loose floral-print jumper was a silk blend that wouldn't survive the drenching. Mud caked her new black flats. She probably looked like something the cat dragged in. Or worse.

She didn't know if God was punishing her for all her ridiculous fantasies, or if the Fates were having a good laugh at her expense. She sighed softly and brushed her wet hair out of her face. Did it matter?

For whatever reason, every time she was in the presence of the man in front of her, she made a complete and total fool of herself. She couldn't stop thinking wicked and inappropriate thoughts. They muddled her brain and left her gasping for air and complete sentences. It had been going on for two years. She glanced down at her dripping self and bit back a groan.

Her gaze was drawn away from her bedraggled appearance to the man bent over a car engine and the way he filled his jeans. It wasn't fair, she told herself, staring at the worn denim and the tight rear end that led to illegally long, lean legs. He was going to stand up, turn around and see her. She was going to look like a dripping, homeless rat, and he was going to be gorgeous. He would stare at her with his killer gray eyes and wait for her to speak. If her tongue didn't get tied up in knots, her knees would start shaking. It didn't matter that she was almost thirty years old and a responsible adult.

In the past two years she'd been in the same room with Austin Lucas exactly eleven times. She'd made a fool out of herself twelve times. Once she'd not only knocked over a small table containing the refreshments for the local meeting, but she'd been in such a hurry to escape from his presence that she'd turned without watching where she was going and ran smack into a wall.

She tried not to think about that. Despite the slight chill from her wet clothing and hair, her cheeks were hot with embarrassment. She pressed her hands to her face and wished she had somewhere else to go. But she didn't. He was her only hope. What on earth was he going to say when he saw her?

She glanced frantically around the garage, hoping to find a source of courage. A radio sat on the workbench lining one wall. Soft rock music filled the room. Next to the front left bumper of the car stood a red toolbox on a dingy cart. Nothing very inspiring, although the maleness of the equipment made her feel even more out of place. She was one of three girls and had little experience with guy stuff.

She drew in a deep breath, inhaling the odors of machine oil, wet cement and something that could only be the heady scent of Austin himself. She fought the urge to back up a step. Inside her belly, nerves and expectations joined hands in an uneven dance of hyper awareness Please, God, why did it have to be him? Around town, women whispered he was as tempting as the devil himself. Heaven knows he tempted her.

She cleared her throat. "Mr. Lucas?"

He chose that moment to drop a wrench and swear loudly. The curses drowned out her words. She opened her mouth to speak again, but he bent down to pick up the tool and his jeans stretched tight across his rear.

Fourteen years ago, Rod Dowell had walked into her sophomore algebra class wearing tennis whites. She'd melted into her school-issue wooden chair and had wondered if she would ever be able to breathe normally again. She finally had, but it had taken almost three years. She'd earned the secret of that crush with her all the way until graduation when she finally found the courage to wish him luck. His brief, "Yeah, you, too," had sent her reeling with excitement.

Rebecca squared her shoulders and told herself she had to say something before she shivered to death. She opened her mouth. He spoke before she could.

"How long are you gonna stand there dripping?"

"Not long," she said, her voice shaky. "Another ten minutes or so."

She clamped her hand over her mouth, not able to believe she'd actually said that. Her eyes fluttered shut. She wanted to die. She prayed for the cement floor to crack and swallow her whole. The floor didn't budge.

"You can look now," he said, a hint of teasing deepening his already low voice.

Rebecca opened one eye, then the other.
Austin
stood in front of her, wiping his hands on a dirty rag. He wasn't especially good-looking, she told herself, then wondered why she bothered to lie. It didn't do any good. He wore a faded denim shirt tucked into even more faded jeans. The slashed fabric by his left knee had nothing to do with fashion and everything to do with his life-style. His sleeves had been rolled up to his elbows. The top three buttons of the shirt were undone, exposing just enough
chest
to threaten her sanity.

Her gaze rose higher past the square jaw and firm mouth – not smiling, of course, for
Austin
rarely smiled to hollow cheekbones and a straight nose. His cold gray eyes carefully shuttered all emotions. Thick dark hair had been brushed away from his face. It hung down long enough to scrape the bottom of his collar.

He was handsome as sin. Her gaze flickered to the small gold hoop earring he wore. The delicate circle of gold looked out of place on his totally masculine form. She'd never known a man who wore an earring. The small hoop looked perfect, she thought in defeat. It made her think of pirates and women stolen away for secret pleasures.

It made her wonder about his flaunting of convention. It made her think about being in his bed. No doubt she would die of plea sure, but what a way to go. She stiffened her spine and told herself to get a grip. He was just a guy, and the gold hoop was just an earring. Of course Glenwood was a small tow and slightly right of the rest of the nation. Men didn't wear earrings here.

But
Austin
made up his own rules. That was, she acknowledged part of his appeal. He was the bad boy, the devil in disguise. How could a woman like her be expected to resist that?

The sound of her name on his lips made her toes curl u side her damp, muddy shoes. "Huh?" Eloquent to the last she thought, fighting back a groan.

She opened her mouth to speak. Nothing came out.
St.
closed it and thought carefully, then tried again. "My car stuck."

He frowned, his dark eyebrows drawing together. "Okay. Where is your car?"

He was speaking slowly, as if to a half-witted child. She wanted to get indignant and tell him she was perfectly capable of carrying on a conversation. Unfortunately she wasn't. With him she'd never managed more than a sentence or two without some sort of disaster striking. She glanced around the open garage. At least there wasn't anything to break or spill here.

"It's in the driveway," she said, moving out of the room and into the rain. The drenching downpour had slowed somewhat, settling into a steady sprinkle. She felt the drop on her head and shoulders.

He hesitated before stepping out into the open. "Do you want an umbrella?" he asked.

She glanced down at her floral-print dress. It hung loosely, albeit damply, around her body. The long, calf length skirt was heavy and probably stretching. "I think it's a little late for that, don't you?"

His gaze slipped over her, heating her chilled flesh and sending electric bolts zooming through her blood. When their eyes met, he smiled slowly. "I guess so."

He stepped past her, his worn black cowboy boots squishing in the mud. She stood rooted in place. It wasn't the thick muck that held her so firmly. It was his smile. She'd never seen
Austin
smile before. Lines had collected by his gray eyes; his teeth had flashed white. The smile had made him look teasingly dangerous, like a wolf pretending to be a lapdog. It had reminded her she was completely out of her element. He was all black leather and five different kinds of sin. She was a babe in the woods, uncomfortable and unwilling to play in the fast lane. He would find her as interesting as flat beer.

She turned on her heel, almost losing her shoe in the process, and started after him. He stood next to her old station wagon. Most of the fake wood paneling had long since cracked and peeled. The side of the car was two-tone, from an accident several years before. The engine had been rebuilt twice, and the vehicle needed new tires.

"You drive this thing?" he asked, staring at it as if he'd never seen anything so pathetic in his life.

"The home owns it," she said. "I don't have a car of my own. There's a bench seat in the back, allowing us to seat five more kids, six if they're small. It's practical."

He glanced at her and raised one eyebrow. She'd never actually seen someone do that. She wanted to see him
do
it again, but she didn't ask him to. He might not understand.

"Practical or not, it's sure as hell stuck: He walked around the wagon. Each footstep squished in the mud.

His property stood at the far end of Glenwood. He had about ten acres. There was a three-car garage, an oversize, two-story barn and a huge empty house. The house was the reason she'd come calling in the rain.

According to rumors, which she couldn't help but overhear, he was richer than God, had never married and was determined to keep his private life private. Glenwood was too small for him to achieve that. His long-term affairs were well documented by most of the women in town. A stunning redhead driving a white sports car had made biweekly trips through town and down his dusty, unpaved driveway for almost six months. Several times Rebecca had seen her and felt a stab of jealousy.
Austin
's collection of ladies made men envious and women dream. Rebecca had dreamed, too, even as she'd known it was useless.
Austin
's women had two things in common: curves and attitude. She glanced down at the wet clothing clinging to her straight, girlish body. She had neither.

He bent over the hood and rocked the car. She watched the muscles bunch in his arms. His shirt was already soaked and clinging to his back and chest. Rain fell on her face and dripped off the end of her nose. In the distance, she heard the rumble of thunder.

Shortage (Best Laid Plans Book 2) by Nathan Jones
Rocky Mountain Justice (The Legend of Camel's Hump) by Jeff Noonan
The Stager: A Novel by Susan Coll
From Fake to Forever by Jennifer Shirk
Science Matters by Robert M. Hazen
All Man by Jay Northcote
The November Criminals by Sam Munson
Creación by Gore Vidal
One Summer Night At the Ritz by Jenny Oliver
Mudlark by Sheila Simonson